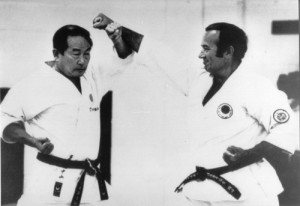 Karate is a Japanese word meaning, in its simplest terms, 'Empty Hand'. It is a system of fighting designed to be used in defense against unarmed and/or armed opponents, in which the karate practitioner (karate-ka) uses nothing more than his own body parts. Karate should never be used in aggression.

Karate is a way of life; it will aid its practitioners on their way through life, thereby making him or her a better person. A superior personality along with great moral and physical improvement can be accomplished through the proper practice of Karate. 'Do' in Japanese means 'the way'. Hence, Karate-Do.

Having originated in China, it was first referred to as 'Chinese Hand'. Mr. Gichin Funokoshi, the founder of modern day Karate changed the characters to employ the meaning, 'Empty Hand'. However, the meaning goes much deeper than the literal definition of the words. Mr. Funokoshi chose the characters for their meaning in Zen Buddhist Philosophy. Rendering oneself empty is one of these meanings. The Karate practitioner must first be void of any conflicting ideas or, in other words, have a mind that is empty and ready to receive the appropriate instruction. Through proper, disciplined and often intense physical Karate training, the practitioner will naturally form a strong character and develop emotional well-being.

Karate, to its Practitioners, is a Martial Art.
But, More Importantly, it is a Way of Building Character.

Karate can be broken down into 4 categories:

To those who practice karate, it is a form of martial art, but more importantly it is a form of human development through which we can change our habits, became more valuable to our community, as well as to everyone we touch in our daily lives. We will learn the meaning of the 5 important words with which finish every Karate training session. They are Character, Sincerity, Effort, Self-Control & Courtesy. In order for us to be better able to compete in this fast moving world of ours, we must learn discipline. We must learn patience and we must have the endurance needed to help keep us motivated to overcome life's many obstacles.

As a form of physical education, karate is unparalleled. Most any sport, when practiced, will develop one part of the body or another. This is not so in Karate. Karate, because of the wide variety of techniques practiced, involving all parts of the body, will develop a very well-balanced and overall coordinated body.

Almost every part of the body can be used in karate, providing it is properly trained. For example, the hand itself can be used ten different ways, such as in punching straightforward or in a circular manner. Delivering a back fist strike using the back of the fist. A hammer fist strike using the bottom part of the fist. A knife hand block or strike using the knife-edge of an open hand. The first three fingers, drawn tightly together on the open hand, can be used for spearing. Elbows and knees can be used very effectively for in-close fighting. There are also a number of kicking techniques in karate, such as the front kick and roundhouse kick, where the ball of the foot is used as the weapon. Side snap or side thrust kicks, where the edge of the foot would be used. Unlike some other forms of self-defense, a karate-ka hardly ever comes into contact with his opponent, until he is ready to deliver his punch, strike or kick. This of course gives him a definite advantage.

Shotokan Karate, in addition to being a superb form of self-defense and exercise, is an exciting sport.
Basically there are two types of events in a karate contest; Kumite and Kata. 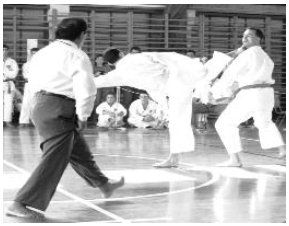 Kumite is free-style fighting that resembles American boxing, but unlike boxing, attacks are stopped just short of contact, to avoid obvious potential injury. 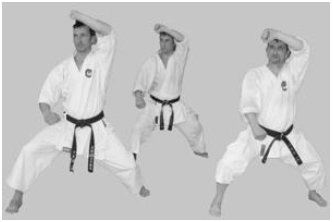 Kata is a formal exercise made up of karate techniques performed in set sequence. Originally intended to be used by the karate-ka to practice alone, katas consist of all types of Karate techniques, such as blocking, punching, kicking, striking and various body shifting tactics. Katas are based on imaginary opponents numbering from four to eight, attacking from all directions. There are more than 50 katas. Some are relatively simple; others are quite complex, requiring a high degree of skill. Many consider the mastering of Karate Kata to be the true essence of karate.